The first date was FANTASTIC, Helen and I had so much in common and so much to talk about. We spent hours in front of the fire place, chatting away like excited school children. We were both telling stories of our very different lives. Helen, born and raised on a farm in Wrexham, and me born and raised in Johannesburg, in South Africa had experienced very different upbringings, but one thing was certain, we both had a very clear golden thread running in our veins and enjoyed and wanted the same things out of life. We had both travelled extensively, we both loved the outdoors, and we both respected and valued friends.

After almost the whole afternoon at the Grosvenor Pulford, we both needed to leave. Helen had parental chores and I needed to get back to my kitchen, to baking and preparing for markets.

We said our goodbye’s in the parking lot and after a quick hug we went our own way again. The next couple of weeks were amazing. I was busy at markets, we were heading towards Christmas, my daughter was in the UK and I was now in constant communication with Helen. We spent hours talking on the phone, spoke at length about dreams, futures, aspirations and desires…..

On the 20th December, my sister announced that she would be having a very formal Christmas Eve dinner at her house. Guests were asked to come in evening wear. My sister asked me if I would like to invite Helen and her daughter.

I spoke to Helen, and explained what my sister was preparing, and informed her that my entire family would be there. Helen was a bit apprehensive at first, but after a little bit of reassuring from my side I managed to convince her to come… This was the moment of truth, the moment all my family got to see the new love of my life, the moment everyone got to meet “Helen”.

I arrived at my sister’s house at about 18:00, everyone else was arriving at about 19:00ish. I was nervous, my parents were excited and the rest of my family were curious. Everyone was making assumptions about Helen, what she looks like, how tall she is, what colour hair she would have, and it went on and on….

The doorbell rang, the palms of my hands were sweaty, this was it…. My sister went to open the front door, with me behind her to meet Helen, as well as the rest of my family peeping from the next room, the door opened and it was not Helen, it was another couple that my sister had invited…. They came in and we explained what was happening……

About 10 minutes later, the door bell rang, this was it, she was here, everybody resumed their positions, my sister went to the door and opened it, and there in front of us all was “Helen” standing right in front of us all…with ripped stockings in her hands…. The very first words that came out of Helens mouth, to my sister was… “Do you have some stockings I can borrow..?”

We soon discovered that the reason Helen was stood holding a ripped pair of stockings in her hand was that when she rang the door bell, she was very nervous, and made one final re-adjustment of clothing before meeting everyone. As she stood outside adjusting everything, she yanked her stockings up, but with the nerves and the rush, she yanked them a little too hard and ripped them off..

Helen was an instant hit with my family. They were all eager to talk to her and get to know her, so for the rest of the evening, Helen and her daughter were submerged into a bombardment of questions…..

Christmas 2013 came and went, and with the start of the New Year, was the start of new beginnings. Helen and I spoke more and more about our businesses. Helen was doing some sewing work for a large corporate client as well as doing holistic massage therapy. I was still doing markets, and pretty soon I had convinced Helen to assist me at the markets. This was something that made Helen very excited, as Helen has a passion for good foods, and has developed her own recipe for gingerbread, as well as her very own Granola (www.itsmygranola.co.uk). So when Helen came to markets with me, we now had some extra products on offer at our stands.

Our products now included, 5 flavours of “Dunking Biscuits”, Cheeses, Homous, skordalia, Tzaziki, Gingerbread and Granola. Helen was making and baking at her house, and I was still making and baking from my parent’s house.

Life at the markets was fun, we pretty soon got well know on the market circuits. We got to know event organisers, and other suppliers. We got to know a lot of different people who would purchase our products religiously each month. To sum it up, life at the markets was fun.. and of course being with Helen was even better. Having said that the markets were fun, I must just point out, that some days the markets were terrible. When the rain was lashing down, and the wind was howling, and gazebos were flying all over the place, and there were no customers to buy your products, those was the days that markets were terrible. There were days that we stood behind our little market table with plastic packets tucked into our shoes to keep your toes from getting too cold… But, on the whole, there were more good market days than bad..

On the 3rd April 2014, we were the proud tenants of number 6 Davy Way, on the Llay Industrial Estate. We had rented a 250 square meter factory unit, which was going to become the home of “Cleopatra’s Foods” 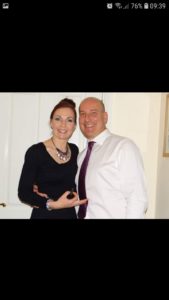